We have been active in the past week on the Low Wage Redress issue. In my update last week – Wage Equity Update #30 – I explained that government is trying to fund wage increases unfairly, providing us with a 2% increase and funding union workers in community living with a 5.3% increase.  We think we can get government to change this decision, but we need your help.

There were over 100 people from across the Province, and representatives from Inclusion BC, Vela Canada, and from unionized agencies, non-union agencies and blended agencies. 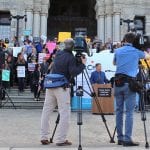 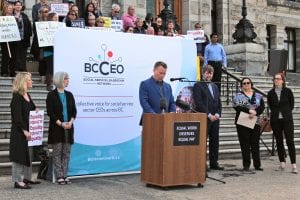 Press Conference with 100 supporters from across the Province.

3. On Wednesday, April 3rd we met with Shane Simpson, the Minister of Social Development and Poverty Reduction, some of his staff, and a representative from MCFD. We explained the history of the wage equity issue, the impact that this Low Wage Redress decision will have on our teams and services, and how many people are affected.  The Minister said the discussion on this issue is live within government and he hopes to have a response soon.

4. On Thursday, April 4th, we posted a follow-up Press Release to update the BC CEO network members, media, families and communities on our progress:

i. April 4, 2019 – BC CEO Press Release – Follow-up to Meeting with Minister Simpson

So, how can you help educate our government about fairness and respect for the workers in community social services?

Contact your MLA’s to let them know your concern about this issue.

email info@spectrumsociety.org to RSVP so we can have enough food.

Get active on Social Media:

Show government that people are concerned about #LowWageRedress. Search the following hashtags and retweet, or go on Facebook and share information and pictures from the Press Conference.

3.)    Retweet @BCCEONetwork and other tweets about #LowWageRedress

7.)    Share this Twitter information with your co-workers, families, people you support, Board members, and your community. The more people involved, the better.

4)      Share this Facebook information with your affected staff members, families, people you support, Board members, and your community. The more people involved, the better.