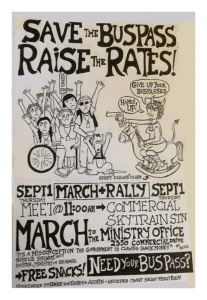 On Thursday, September 1, 2016 people will meet at 11am at the Broadway SkyTrain Station – Broadway and Commercial, and march to the Ministry of Social Development Office at 2350 Commercial Drive to protest the government’s actions around Disability Benefits:

There are protests happening around the Province.  Please come out and let the government know that legislated poverty is wrong.